This is a very simple roasted pepper recipe I learned while I was living in Madrid, from my landlady/host Sra. Pilar in her high-ceilinged apartment in the upscale neighborhood of Salamanca. That was quite possibly the most I’ve ever paid to rent a room, but I guess it was worth it, since I’m still making her recipes nearly a decade later.

Red peppers are an amazing thing. Roast them in the oven, and they come out as a dish, nothing else needed (I’ll be adding a bit of seasoning anyway).

I’m not listing exact quantities, because this is a very flexible dish. But to give you an idea, last time I used six red peppers (probably about 1.5 kilos) and three garlic cloves. This filled a shelf in my oven and produced about three cups of cooked peppers. Adjust accordingly.

Slice the peppers in half and remove the seeds and stem. Arrange sliced side down on a lightly oiled baking dish or cookie sheet (something that will catch liquids). Drizzle some olive oil on the peppers and bake at 220 degrees Celsius until the peppers become soft and begin to blister. Flip them over and let them cook a few minutes more.

Take the peppers out of the oven, and cut them in strips in a bowl, making sure to catch the juices. Thinly slice the garlic cloves and mix them with the pepper. Drizzle some good-quality olive oil on top, and sprinkle with kosher salt.

If you let the peppers sit, they will continue to secrete juices, and the mixture will actually become quite thick. 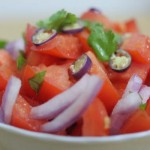 Search for recipes in more than 3000 fabulous food blogs.